The Angel of the North is quite possibly the greatest and most famous contemporary sculpture that most people around the world have never seen, which is interesting because it’s actually seen by one person every 0.94 seconds. Designed by Antony Gormley, the Angel of the North is located in Gateshead, England.  The sculpture was completed in 1998 and is a 20 meter tall steel angel with 54 meter long wings standing on a hill overlooking the A1 and A167 parkways into Tyneside, and the East Coast Mail Line rail route. 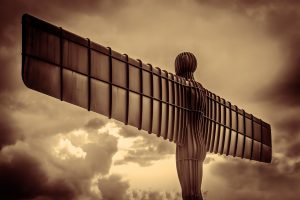 There was a lengthy fight from locals that did not want the statue to stand guard over the city, but since its installation, the Angel of the North quickly evolved into one of the most recognized and loved symbols of the Northern England. It was not exactly the statue that many locals were opposed to, but rather they were concerned that drivers would be distracted by the statue and it would lead to increased traffic accidents along the A1. This was not the case and there has not been an increase in traffic fatalities.

Angel of the North Facts