The Statue of Liberty (French: La Liberté éclairant le monde), was a gift to the United States from the people of France and was dedicated on 28, October, 1886. The statue itself is technically called Liberty Enlightening the World, and the neoclassical sculpture was designed by Frédéric Auguste Bartholdi, and the structure holding the statue in place was built by Gustave Eiffel. With a broken chain at her feet, and the inscription “July 4, 1776” on her tablet, The Statue of Liberty stands guard as a symbol of freedom and welcomes all those who enter the United States.

Bartholdi was inspired for the sculpture by the French law professor and politician Edouard Rene de Laboulay, who is said to have commented that any monument dedicated to American independence should be a joint project of the French and the American because of the role the French played in the United States declaring their freedom from British rule. Because of his role the statue has sometimes been referred to as Laboulay’s lady. The joint venture in constructing the statue was that the French would design and build the statue and the United States would build her a pedestal on which to stand.
The arm bearing the torch was displayed at the Centennial Exposition in Philadelphia in 1876 and later in Madison Square Park in New York from 1876 to 1882. This was partially in an effort to raise funds for the construction especially because the Americans were having difficulty coming up with what was required for the base. Publisher Joseph Pulitzer of the New York World was responsible for starting a drive for donations and more than 120,000 people contributed (most of them less than a dollar). At the time of its final construction, the pedestal was on Bedloe’s Island in the state of New Jersey. 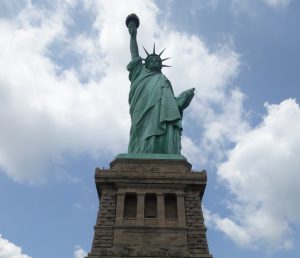 The completion of the statue was marked by the first ticker-tape parade in New York and the dedication ceremony was presided over by President Grover Cleveland. The Statue of Liberty has been taken care of by the National Park Service since 1933. There were major renovations in the mid 1980s (84-86) and minor renovations from 2011-2012. Declared a UNESCO World Heritage Site in 1984, but the statue was designated a U.S. National Monument by President Calvin Coolidge on 15, October, 1924.

The Walls of Ávila (Ávila, Spain)