The Empire State building, located on Fifth Avenue between West 33rd and 34th Streets in Manhattan, New York City was once the tallest building in the world for almost 40 years.  With a roof height of 1,250 feet (381 m), the building stands a total of 1,454 feet (443.2 m) tall including the antenna.  Completed in early 1931, the Empire State Building replaced the Chrysler Building, also of New York as the world’s tallest.

The distinctive art deco design of the building has helped it maintain its status as an American cultural icon and it is considered one of the Seven Wonders of the modern World by the American Society of Civil Engineers.  The building and the interior of the street floor and designated landmarks of the New York City Landmarks Preservation Commission, and the building was designated a U.S. National Historic Landmark in 1986. 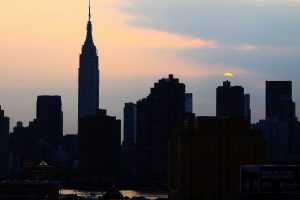 The site of the Empire State Building has long been a site for the social elite of New York City.  In the late 19th century the block was occupied by the Waldorf-Astoria hotel which was razed for the construction of the Empire State Building.  Before its run as the Waldorf-Astoria, the site was home the Joh Thompson Farm.  At this time a small stream crossed the site and emptied into Sunfish Pond just a block away.

The building was designed by William F. Lamb of the architectural firm Shreve, Lamb, and Harmon. Using designs for the Reynolds Building in Winston-Salem, North Carolina and the Carew Tower in Cincinnati, Ohio as a basic design framework, lamb was able to produce building drawings in just two weeks.  This breakneck speed was not just in the design of the building but in its construction as well. From beginning to end the construction took just 20 months with an average of more than 5 floors a month. Part of a race to be the tallest building in the World, the Empire State Building took the title from the Chrysler Building which only held the title for 11 months. The Chrysler Building took the title of the world’s tallest building from another New York City landmark, the 40 Wall Street Building, that unfortunately was only able to hold the title for a single month of 1930.

Since the construction took place during the great depression, the cost of construction was a great deal less than it otherwise would have been. The untimely and unfortunate depression was very hard on the Empire State Building and it remained largely empty for several years. In the first few years the owners were making as much money with the observation deck as they were with rent.  Because of its status as a largely unfilled building it was referred to jokingly as “The Empty State Building” and was not profitable for its owners till 1950.

Visited by more than 110 million people since its construction, The Empire States Building has one of the most popular outdoor observation decks in the world. Located on the 86th floor, the observation deck has 360-degree views of New York City. There is a second observation deck on the 102nd but it is completely enclosed and is much smaller.