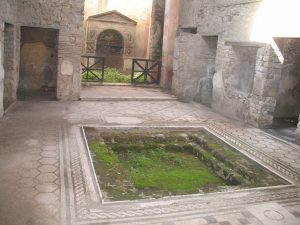 The city of Pompeii was once a bustling city on a hill just across from the modern city of Naples.  Along with Herculaneum and many small villages in the surrounding area, Pompeii was destroyed by Mt Vesuvius on the 24th of August in 79AD.  Buried under 13-20 feet (4-6m) of volcanic ash and pumice, Pompeii was so quickly covered that it was incredibly well preserved.  The eruption destroyed the city, killing thousands of its inhabitants and burying it under tons of ash. For almost 1,500 years Pompeii was undiscovered and because there was.

Believed to have been founded in the late sixth or early seventh century BC by the Oscans, Greeks settled in the area in the eighth century BC, and the region attracted wealthy vacationers interested in soaking up the sun and seeing the sights.  Pompeii did not become a domination of Rome till the fourth century BC, and it was not till 80 BC that it became a Roman colony.  After a short 160 years, with a population of between 11,000-15,000 it was a thriving city with water systems, an amphitheater, gymnasium, and a highly valuable port.

Rediscovered in 1748 by Spanish engineer Rocque Juaquin de Alcubierre, the objects covered by ash were remarkably well preserved.  Thanks to the lack of air and moisture, these artifacts have been able to provide detailed insights into the life of an ancient city.  During the excavation, plaster was used to fill voids in the ash layers that once held human bodies.  These plaster casts have allowed archaeologists to see the exact position people were in when the perished.

While excavation of the site has given the world innumerable value, weathering began almost as soon as the site was uncovered.  Subject to natural and man-made forces, Pompeii is rapidly weathering and it is thought that further protection may have to be instituted by UNESCO to protect the site for future generations.

A popular tourist destination for more than 250 years and one of the most popular sights in all of Italy, Pompeii was declared a World Heritage Site by UNESCO in 1997.  Vesuvius National Park includes Herculaneum, Pompeii, and many smaller sites covered by the ash of Mt Vesuvius.