Bright and shining on the side of Young Brothers Pharmacy is the oldest building painting advertising Coca-Cola in the world.  Painted by a cola syrup salesman in 1894, the sign was restored in 1989 and authenticated as being the oldest in 1994.  In the small town of Cartersville, Georgia, this sign stands as a giant homage to the southern roots and lasting legacy of the world famous beverage. 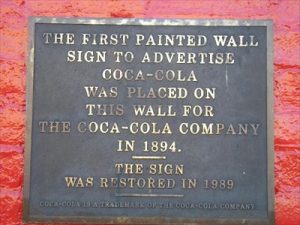